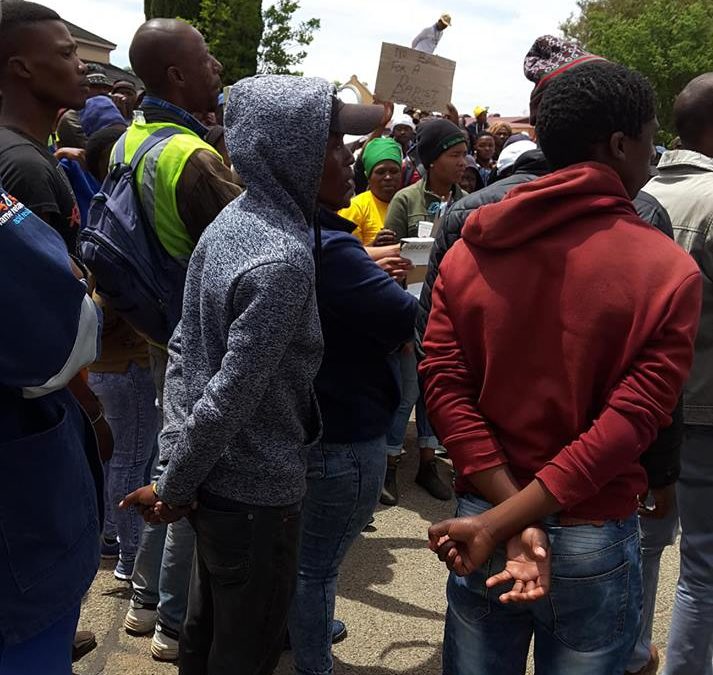 Ventersdorp residents recently took to the streets to protest a court judgment that granted an alleged rapist bail and to support the victim who was allegedly raped by a Police Officer.  The officer in question is based in Potchefstroom.

The marchers assembled at the Ventersdorp Magistrate Court where the accused appeared on the 18 October 2018. The accused was granted bail of R3000 for allegedly raping a 14-year-old girl to the dissatisfaction of the residents. He is due to appear before the court on the 21 November 2018.

The Director of Ventersdorp human rights office, Daniel Dibe who was also present at the march, indicated that the residents were dissatisfied with the judge’s ruling. “The community says, they are not happy with the decision by the court to grant the policeman Bail of R3000, ”Dibe said.

The accused was arrested on Wednesday and appeared in the Ventersdorp Magistrate’s Court on Thursday morning. It is believed that two police officers had picked up four girls in a police Nyala in Tshing, Ventersdorp.

The girls were allegedly promised food and drinks. Two of the girls were reportedly ordered out of the police Nyala, leaving the remaining two girls with the police officers. One of the remaining two girls was allegedly taken to a guest house where she was raped” according to a report by https://www.iol.co.za/news/south-africa/north-west/cop-arrested-for-14-year-old-girls-rape-17540325

Dibe who is also there to support the 14-year-old girls said, “the Community said protesting in Ventersdorp will never end until the community is happy,  and further said that the community is concluding that the court decision is taking sides and the poor community is not protected by the justice system”.

Dibe is a paralegal from Ventersdorp Human Rights Legal Network. His office is in the North West province and is situated in South Africa’s rural farming community in Ventersdorp. Tune in on STAR FM 102.9 at 19:30 on Tlatlana ya tshedimosetso with presenter Tumisang Mooketsi every Thursday.