Rape Has To Stop 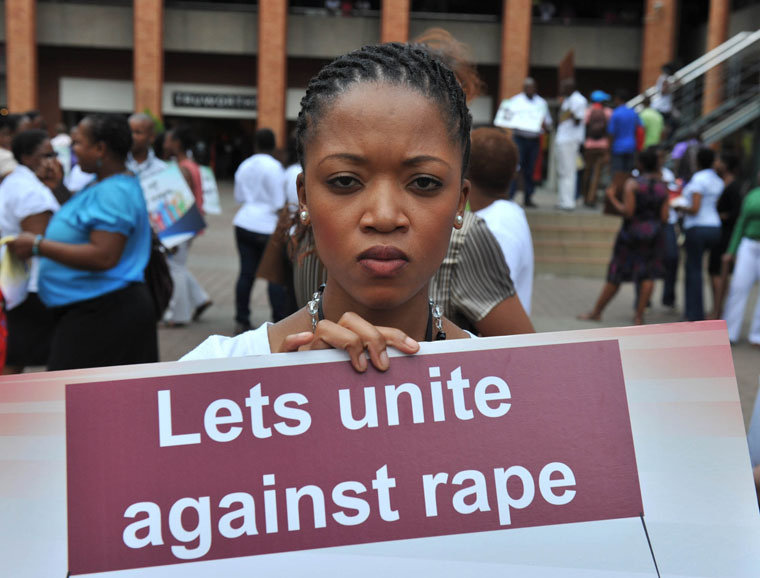 The studio talk took place on the Business Class show and the presenter Lihle Mthethwa the interviewed the paralegal to expand on the matter.

This is one of the stories about rape: –
I was 8 years old my step-brother came into my room and sexually abused me. He said he can see that I love penises. This kept happening until I was 12. I didn’t know what to do or what to think of my brother. After 6 years he finally moved out of our house and I lost my virginity 6 years ago. I wasn’t a virgin any more. It was taken by a boy who never even cared about me.

How old are you now?
I am 14 years old. Now I’m with a boy who means the world to me. He is the only person I ever told about what my step-brother did to me. He is always there for me no matter what, and I thank God that he gave me at least one person to talk to because I’m very different from my family. Sometimes I just wish I could tell them what my step-brother did to me and maybe they would love me or at least treat me better as a person and happy with my life because my step-brother has moved out.
What does one do when they raped?
• If you want to report the crime, notify the police immediately. Reporting the crime can help you regain a sense of personal power and control.
• Go to a safe place.
• Preserve all physical evidence of the assault. Do not shower, bathe, douche, eat, drink, wash your hands, or brush your teeth until after you have had a medical examination. Save all of the clothing you were wearing at the time of the assault. Place each item of clothing in a separate paper bag. Do not use plastic bags. Do not clean or disturb anything in the area where the assault occurred.
• Call a friend, a family member, or someone else you trust who can be with you and give you support.
• Get medical care as soon as possible. Go to a hospital emergency department or a specialized forensic clinic that provides treatment for sexual assault victims. Even if you think that you do not have any physical injuries, you should still have a medical examination and discuss with a health care provider the risk of exposure to sexually transmitted infections and the possibility of pregnancy resulting from the sexual assault. Having a medical exam is also a way for you to preserve physical evidence of a sexual assault.
• Get information whenever you have questions or concerns. After a sexual assault, you have a lot of choices and decisions to make – e.g., about getting medical care, making a police report, and telling other people. You may have concerns about the impact of the assault and the reactions of friends and family members. You can get information by calling a rape crisis centre, a hotline, or other victim assistance agencies.
• Talk with a counsellor who is trained to assist rape victims. Counselling can help you learn how to cope with the emotional and physical impacts of the assault.
Why do men rape women (Rape psychology)
Not all human behaviours map to a single psychological need but instead the same behaviour could appear because of many different psychological needs. In other words 10 rapists could rape for 10 different reasons.

Below are some of the most common psychological drives behind rape:
Dealing with rejection:

What does rejection has to do with rape? One of the reasons a man could rape a woman is to make up for the rejection he felt earlier by the opposite sex. By overpowering someone from the opposite sex the man can feel relieved of the shame of rejection. You might be wondering why a man who was rejected by a woman rapes another one but when you know that the subconscious mind believes that people who share certain similarities are the same person then everything will become clear. You might fall in love with a woman just because she looks like a woman you loved before and the same goes for rape. A man can rape a woman just because she resembles a woman who rejected him earlier.

The media teaches people indirectly that men are superior to women because of their ability to dominate them sexually. Because of these advertised beliefs some men start to seek that kind of domination in order to feel manlier. In other words some men rape women in order to assert their manhood especially if they had doubts about their own masculinity.

Some men rape women in order to take revenge from that specific woman, from a woman who resembles her or from women in general. Suppose that a man had a very tough boss who happened to be a woman. In such a case that man will feel ashamed because his manhood is threatened by a woman and as a result he might feel like wanting to rape a woman who resembles her in order to feel good (see also How your past affects your present). Some people wonder why some men rape old women who are above 60 or even 70 but when they know that the rapist picks a target that resembles someone he already knows then the mystery will disappear.

some men don’t have a good social life and aren’t any lucky when it comes to dating. Those men are put under pressure by their peers and as a result they start to experience shame. Some of those men start to become rapists in order to compensate for the lack of intimacy in their social lives