Daughter believes her father has been kidnapped

Papi Tobbiaf has disappeared. His family and friends are destroyed with grief. And Papi’s daughter, Kekeletso Nthako is passionate that her father’s disappearance is linked to a sprawling court case that has been upsetting the Vaal for years. She believes he’s been kidnapped or perhaps even killed!

A missing person’s case was opened for Papi (his full name is Vincent Thibello Tobias) on Monday the 8th of February at Sebokeng Police Station. Four days later the K9 police came and sniffed around his yard and inside the house. Papi is 47yrs old and works for a milling company as a general worker, but his true calling workwise is social activism. 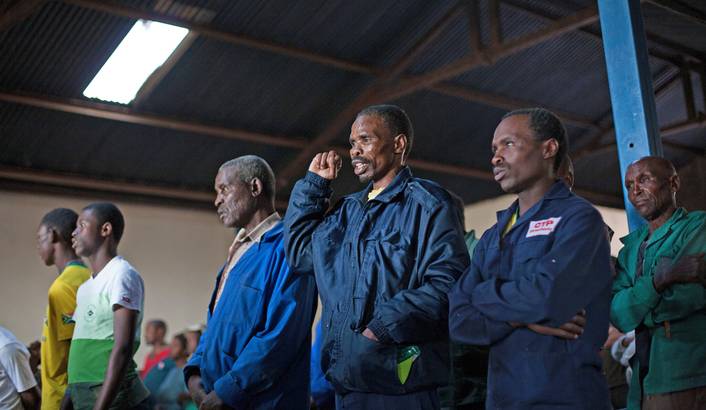 Residents of Boiketlong gather for those convicted of burning a councillor’s house in 2013, allegations local activists claim are politically motivated. (Greg Nicolson)

Papi has been helping “The Boiketlong 4” raise funds for their legal fees and this is why his daughter Kekeletso believes he was kidnapped between the evening of Saturday the 6th and the morning of Sunday the 7th of February.

“The Boiketlong 4” were sentenced to 16 years in prison back in April 2015. Boiketlong is the name of an informal settlement in the Sebokeng area. A Sebokeng magistrate’s court sentenced three men and a woman (Dinah Makhetla, Sipho Manganye, Dan Molefe and Pulane Mahlangu) under common purpose for assault, arson and malicious damage to property. These actions were said to be during a community protest in 2013. The arson involved torching a shack and two cars belonging to ANC ward councillor Maselloane Nthebe.

Nine months later a High Court action secured the four activists bail. They are now fighting to have their sentences overturned. Already, the attorney who secured their bail is owed money which the Boiketlong community is struggling to raise.

As reported in the Sowetan newspaper on the 23rd of February, Papi was the head of the committee in charge of raising funds to pay these legal fees. He had told his committee that they were mismanaging the money days before he went missing. Kekeletso believes a member of this committee is responsible for her father’s disappearance. Papi was last seen when he left home to go watch a soccer match at a local tavern.